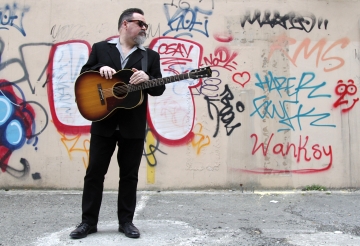 Since leaving Smoke Shop in the early 90’s Darren has cemented his reputation as the nation’s most original, contemporary blues voice. He’s released six blues-based albums and his latest album, 2018’s Too Many Millionaires  debuted at number three on the Official NZ Top 20 Album Chart and stayed in the charts for five weeks. The songs broaden the blues base and we are excited that these songs are totally relevant to the modern folk scene. Darren’s latest album, Getting Sober For The End Of The World, is due to be released on the 1st of October, 2020.

From Christchurch, Entrada are Tessa White (violin and mandolin) and Jonathan Le Cocq (guitar), playing a unique blend of music for violin, guitar and mandolin, rooted in the Celtic tradition but finding its own pathway through it. Jonathan’s background in early music – performing with national groups like NZBarok on historical instruments  – informs his approach to playing traditional music, and combines with Tessa’s youthful, virtuosic tune-playing for original and dynamic music making.

A Wellington based band who draw inspiration from traditional music from the Balkan region including gypsy and their own original music. They infuse new life into traditional folk songs and rebuild them in their own Mehana style. You will take a musical journey from melancholy of Roma violin laments to storming beats of Gypsy rumba, mixing with traditional Balkan rhythms as a blend of influences through time and space.

Barry and the Crumpets

A foot-stomping, barn-romping country dance extravagance. Playing old-time classics, breakneck bluegrass and swampy blues. All played toe-tapping fast and knee-slapping rowdy.
It all started in Wellington when three friends started jamming together with banjo, mandolin and cajon on a dark midwinter night in 2017. As the night wore on, the tunes got stompier, their friends danced faster and before they knew it a band was born. After 18 months of gigging around markets, bars and house parties in Wellington, a fiddler joined the fray. The band have since been honing their particular flavour of upbeat, old-fashioned mountain music and three-part harmonies with a smattering of celtic roots. Fresh from stomping performances at Acoustic Routes and the Wellington Bluegrass Society, the Crumpets will add local life and fun.

As you may or may not know, a Grawlix is a ‘a spiral-shaped graphic used to indicate swearing in comic strips’, whereas Grawlixes is a Wellington-by-way-of-Dunedin indie-folk band intent on inserting themselves into your brain with their intelligent, infectious songs about relationships, death and not being invited to parties. Continuing the great lineage of artists who bring sadness to their sprightly melodies, Grawlixes’s music often deals in the melancholy with self-deprecating honesty and beautiful boy-girl harmonies, sung by co-founders Robin Cederman and Penelope Esplin.

Following an extensive European tour supporting label-mates French for Rabbits, Grawlixes released their debut album ‘Set Free’ reaching #1 on the NZ weekly music album charts. They are now preparing to release their follow up album ‘Love you to death’ in Sept this year.

From Dunedin, Bernadette, Mike and Siobhan take time out from their many individual pursuits to come together to sing and play as a family. The result is an eclectic repertoire from the solidly traditional to the obscurely modern, all based around those close harmonies that only a family seem to be able to produce.

Mike is perhaps best known for his work with The Chaps, Catgut Steel and, for many years, the Pioneer Pog ‘n’ Scroggin Bush Band.

Bernadette and Siobhan were enduring members of the fondly-remembered and occasionally reprised Rhonda and the Ravers, a group based on harmonies, dance moves and bling. 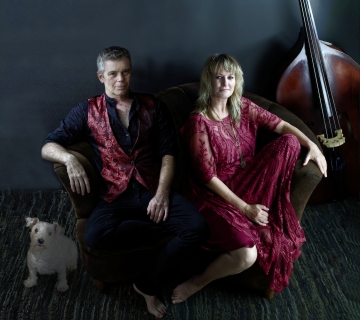 Sadie & Jay met and formed a creative contemporary folk and roots duo in Australia seven years back. They’ve recently returned to live in New Zealand and look forward to the next chapter in their musical journey. Sadie & Jay’s music features historical Australian stories, bursting with colour, texture and spirited characters. Their latest album ‘A Passing of Seasons’ has been awarded Australian Celtic Album of the Year.

Three original studio albums have included multiple first place winners and finalists in APRA AMCOS awards, The Australian Celtic Awards and Blues & Roots Radio, songs from all three albums have made the Top 10 in The Australian Songwriters Association Awards.

Sadie & Jay have been performing as a duo in and beyond the Brisbane folk and festival scene. They’ve completed two UK tours and it’s great that they are now locals – adding Wellyfest to their appearances as overseas guests at the Hamilton Folk Festival last year.

Take Mary’s kitchen table, Thursday evenings, a dozen ukuleles, 1 teapot, many cups, handmade pastry, wine and many more cups and you have the essence of this Brooklyn community uke mash up.

The Flukes are a fun group who ‘ukefy’ some old favourites for their enjoyment and yours. They play largely un-amplified so expect to get close.

Their workshop will be an all comers sing-along – bring your uke or just your voice. The Flukes will tell their story of coming together and the key ingredients needed to keep a weekly community group afloat and continuing to enjoy and challenge themselves, including mixing it up with different parts and instruments.  Join in and have some fun.

An alt/indie folk-rock artist, New Zealand-American songwriter, currently based in the Wairarapa. Colette Rivers brings together an eclectic mix of guitars, drums, folk instruments and synths to create music that is both uplifting and melancholic.

Colette’s voice shivers with the raw expressiveness of greats like Bruce Springsteen or Gillian Welch and a sharp edge that evokes the likeness of Liz Phair or Aimee Mann.

She has released the EP Wandering Thoughts  – a 4 track release featuring the single ‘Kamikaze Girlfriend’ written about the twisted ways people can give all to love. Colette’s debut album, “Memory Lake” is inspired by nature in its many forms – aptly named after the great Lake Taupō where she lived after moving with her family from Washington state at age 11.

There is an undeniable sense of strong melodic hook-writing, as featured in the haunting and sometimes gritty melodies of ‘Quiet Places’, ‘Out of the Cage’ and ‘Fickle Soul.’ The honesty, poeticism and depth of Colette Rivers’ lyrics reflect a fearlessness in revisiting the past, feeling the moments of the right now, considering life and death and the beauty, pain and reality of it.

An acoustic combo from Godzone Lando celebrating New Zealand songs and songwriters with a farmyard-infectious humour guaranteed to put a smile on your feet and the swing back in a Taranaki gate.

Good-time home-grown music;  from rustic roots and big-smoke blues to regional originals and classic kiwi rock; Foot-tapping ditties from the family knee and from the cowshed wireless at milking time. Songs from 78’s and sing-alongs. From back-country roads, the bush and the big smoke.

THE ROUTES TAKEN BY THE BOOTS OF THE TANGO:

Gumboot Tango was formed in 1994 when Mike Harding joined Alan Muggeridge, his wife Janet and brother Steve to assemble and record, in Alan’s Rowan Studio, a set of ten Taranaki songs and then perform them at the 1995 Taranaki Festival of the Arts. Further musical adventures followed – after the ‘Taranaki Top Ten’ cassette came ‘Rattle Yer Dags’ and appearances at many folk and music festivals including the Second Annual Great Urenui School Possum Hunt and WOMAD ’99. Along the way the addition of ‘other band’ member and friend Wayne Morris on drums for a while before Alan became ill with cancer and tragically died in 2000.

Many of you will know the enormous energy and fun Gumboot Tango bring to the many festivals they get involved in.

Raven Mavens started as a duo with Cindy Muggeridge, queen of the boogie and blues on piano and Marian Carter playing soulful clarinet. These two fun-loving, versatile performers brought sweet harmony and a sassy, happy-go-lucky slant to their music.

The duo became a trio when they added Anje Glindemann on drums.  Anje has the philosophy of playing the ‘song’ and not the ‘drums’ (while actually playing the drums) sometimes light, sometimes rocking, but always with a solid feel. The trio became the ‘Quartette’ with the addition of versatile virtuoso, Kate Marshall on accordion, flute, violin and vocals. Kate started her musical life as a classically trained pianist, but had a tendency to improvise the ends of Mozart sonatas. It was decided that she should find some music to play where that was legitimate.

Each of these women is a musician worth hearing in her own right, playing and singing in other lineups, but when they get together there’s a unique and beautiful synergy. Expect this talented combination to dish up a variety of music and styles, from great divas like Bessie Smith and Nina Simone, to their own original songs. The mood will range from sensitive to burlesque, with a bit of storytelling and hilarity on the side. 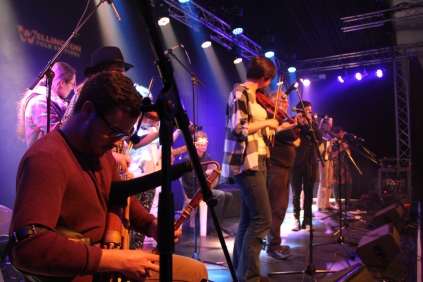 Vicfolk has been running its ever-popular ceilidh dances for the Wellington community since 2017. For students and public alike, the club offers opportunities to learn about and get involved with Celtic folk music. If you’re of a musical inclination, they teach tunes from the ground up, serving as a gateway into the weekly Wellington Irish Session and Vicfolk’s very own ceilidh band. For those who just want to dance they hold regular dance workshops and public ceilidhs – pandemic-permitting!

Vicfolk has hosted a variety of ceilidhs and workshops at Wellyfest over the last few years. This year they’re back for more exciting ceilidh-based shenanigans with experienced callers and an energetic band, cherry-picked from the very best folk musicians that happen to turn up to the weekly club meetings.

As ever, their ceilidhs promise to be fun, lively, and social, and also incredibly easy; you need never have danced before! Bring as many left feet as you want; our capable callers will guide you through every step of the way.