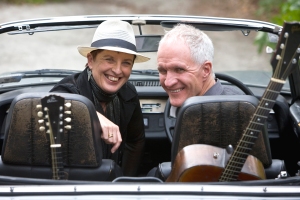 Millennium Hippies (NZ)
Millennium Hippies is Mark Laurent and Brenda Liddiard. For more than 2 decades they have been playing music together, part of that secret army of ‘indie’ musicians who fly just below the commercial radar, playing grass-roots, mostly un-plugged music throughout New Zealand, Australia and the UK.  For them, songs, poetry and humour are ways to talk about “life, the universe, and everything”. They are also well-known in acoustic music circles as solo performers.

Mark’s background in blues/rock gives his performances a distinctive edge, but he also writes insightful ‘slice of life’ songs, which can touch audiences deeply.

Brenda has been greatly influenced by English and American acoustic music, and found her niche as a songwriter during her passionate involvement with environmental and anti-nuclear activism in Australia, during the 70’s and 80’s. These days her songs look at everything from menopause and motherhood, to mental illness and memories.  Her recent album Box of Memories was a finalist in the 2013 Best Folk Album Tui Award.

Together or separately Mark & Brenda have recorded or contributed to around 30 albums, written hundreds of songs and instrumentals (some of which have been covered by other artists or used in movie soundtracks), with a range of styles including blues, reggae, acoustic rock, ambient, folk ballads and alt. country.  Instruments include guitars, mandolin, ukulele, rowan lute and vocals.  Mark has published 3 collections of poetry, so their concerts are often peppered with poems and stories.