Music from Denmark and beyond 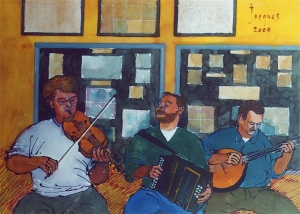 ULC is a Danish/Irish trio formed in 1998 and represent a wealth of experience, which only comes from a long and deep rooted love of the various musical traditions they have been playing and performing over the past 30 years. From the outset the band members felt it seemed more natural to combine the various music traditions they have been involved in rather than confine themselves to one particular genre. Traditional Danish music from the 17th century, beautiful and haunting dance tunes from the island of Fanø, songs from the Irish /Celtic tradition as well as American folk, bluegrass and swing music make up the band’s extensive repertoire. All of these tunes and songs are played with spirit, enthusiasm and a sense of humour that characterises ULC.

Peter Uhrbrand: Fiddle. Peter Uhrbrand is acknowledged as one of Denmark’s most influential traditional musicians. Peter hails from Fanø, a small island off the west coast of Denmark, which has a unique style and music tradition stretching back three hundred years. Through his tireless work to preserve Denmark’s oldest and continuous music tradition, Peter has become a role model for a whole generation of younger folk musicians.

He has toured extensively in Europe and, between 2001 and 2008, toured Australia and New Zealand together with Eskil Romme and Jens Ulvsand as part of a trio called Faerd. In October 2014, he received the prestigious Gudman Pris, an award which is normally given to Danish rock musicians.

Sonnich Lydom: Accordion and harmonica. Sonnich has been playing Irish and Danish traditional music s first introduction to traditional music was through his strong family ties on the island of Fanø and this music has been a part of his repertoire ever since.

Sonnich’s musical journeys to Quebec and meeting with French-Canadian musicians have played a big part in shaping his distinctive style of playing on the accordion. Sonnich is a highly respected and sought after musician due to his ability to play a wide range of genres. Among the countless bands Sonnich has played with over the past three decades are Ash Plant, Foxhunters and the Danish folk rock group Dronningens Livstykke with whom he recorded several albums.

Seamus Cahill: Guitar, Bouzouki and Vocals. Seamus originally comes from Cork in Ireland but has settled in Denmark. He has been playing Irish traditional music since the seventies. Seamus has played in numerous Irish bands, among them Ash Plant with whom he recorded two albums and which has toured extensively in Europe. He has frequently lent his considerable skills as an accompanist to Irish musicians visiting Scandinavia. More recently he has toured with Co. Clare musicians, Josephine Marsh on accordion, Yvonne Casey on fiddle and Mick Kinsella on harmonica and concertina.

Both Peter and Sonnich have been bestowed with the honorary title of Rigsspillemand (traditional folk musician) in recognition of their lifelong contribution to traditional Danish music.

For more information about the band go to their website www.ulc.dk which shows the full five-piece band.  For a listen to their music, go here or, for the latest YouTube videos of them playing as a quintet, see “Femspring” or “Oh no no I/Den gamle gjønne“.