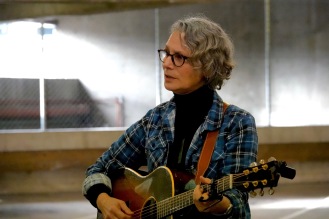 Donna Dean is that artist whose songs you’ve heard on the radio or whose personal story you’ve been intrigued by in interviews with Kim Hill or Mike King. If you were at the Festival two years ago, you might have seen the documentary Bill Morris made about her.

But you may seldom have seen her play live because, for the most part, she flies below the radar. There’s nothing flashy about her stage get up, no props or glitz but if anyone can keep you rooted to your seat with honest lyrics and a guitar, she can. She doesn’t know the intimate details of your life but her lyrics, with their parallels, may raise the hair on your neck.

Donna has been recording self-penned albums and touring Europe since the 1990’s, winning awards and respect from a luminous list of songwriters, singers, musicians, producers and promoters.

Donna will play a feature concert, participate in the Songwriters’ Forum and play a set in the Sunday evening showcase.