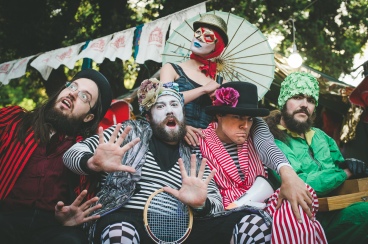 Hold onto your hats as Ungus Ungus Ungus, Australia’s premier peddlers of vaudevillian psychedelia, strap you in for a rollercoaster ride of dance and mayhem. This is carnivalesque party music for the creatively inclined, traversing territory from global dance beats to swing, jazz and hip-hop. Featuring mind-tickling on-stage antics and a bold visual presence, their cosmic circus is on a mission to make you boogie, gawp and expand your perceptual horizons.

Their new fifth album, The Cosmic Carnival Part II: Ascension (2018) is the sequel to The Cosmic Carnival (2016). Both are concept albums designed to accompany their swinging sci-fi concept show that has been destroying dance floors across Australia and New Zealand for the past five years. The most recent release sees the band venture far deeper on their exploration of vintage futurism through a fusion of rich acoustic instrumentation with electronic grooves and the familiar mix of world music, swing, hip-hop, and the sounds of the carnival.

Ungus Ungus Ungus features a flexible lineup ranging from a large live band to a smaller soundsystem ensemble emphasising electronic production in tandem with live musicians. This has made them a favourite of both the electronic and folk festival circuits, with their theatrical bent taking them into the performing arts and circus worlds. Their list of appearances includes internationally regarded festivals including Rainbow Serpent, Subsonic, Luminate (New Zealand), Wangaratta Jazz and the Western Australian Circus Festival, alongside boutique club nights such as Melbourne’s Electro Swing Club and Sydney’s Art Party. They are regulars at Australia’s regional burn, Burning Seed.

With origins in facilitating and playing some of Sydney’s longest running underground events over the last decade, the Ungus camp are firmly grounded in grassroots musical culture and delight in making community music happen. This tendency manifested in 2015 as the emergence of the Melbourne-based Bandhaus label and artists collective, of which the band is a founding member.

Ungus Ungus Ungus will appear in concert and member, Max Schollar-Root, who works in developmental music classes and music therapy, will present a couple of workshops entitled “Music is Fun!” targeted at the younger Festival goers.